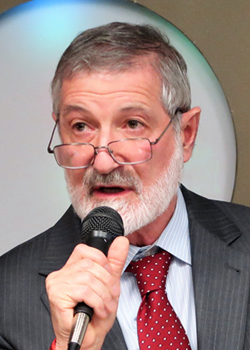 He represented ICAN at the Oslo and Nayarit Conferences on the Humanitarian Impact of Nuclear War, and in September of 2015 he addressed a special session of the United Nations General Assembly.  In May of 2016 he led the session on the humanitarian consequences of nuclear war at the United Nations Open Ended Working Group meeting in Geneva that led to the successful negotiation of the Treaty on the Prohibition of Nuclear Weapons in the summer of 2017, and on September 20 of 2017 he represented IPPNW at the signing ceremony for the Treaty.

He has published studies on the medical consequences of nuclear war in the New England Journal of Medicine, the British Medical Journal, the Lancet and the World Medical Journal, and has lectured widely in the United States, and in India, China, Japan, Korea, Russia, South Africa, Israel, Pakistan, Mexico, Brazil, Columbia, and throughout Europe on the health effects of nuclear weapons.   He represented PSR and IPPNW at the Nobel ceremonies in Oslo in December 2009, honoring President Obama, and presented their new report, Nuclear Famine: One Billion People at Risk, at the Nobel Peace Laureates Summit in Chicago in April of 2012. A second edition was released in December of 2013.

Dr. Helfand was educated at Harvard College and the Albert Einstein College of Medicine.  He is a former chairman of the Department of Emergency Medicine and President of the Medical Staff at Cooley Dickinson Hospital, and currently practices as an internist and urgent care physician at Family Care Medical Center in Springfield, Massachusetts.

He lives with his wife, Deborah Smith, a medical oncologist, in Leeds, Massachusetts.