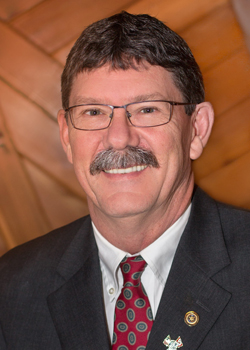 Kees van der Pol is a retired British Columbia high school principal, and has been a Rotarian for 16 years.  He was president of the Rotary Club of Nakusp from 2011 to 2013, and was Rotary District 5080 Governor in 2016-17.

His wife, Mayumi, is the current club President and will soon be the third club member to complete a two-year presidency.  Both are Paul Harris Fellows and Rotary Leadership Institute graduates.  Kees and Mayumi have been married for 41 years and have two daughters, both living in Calgary; and three grandchildren.

Born in Rotterdam, the Netherlands, Kees received a B.A. in Geography and German from the University of Victoria, and an M.Ed. from the University of British Columbia.  In 1974, he spent one year at Keio University in Tokyo, Japan, after which he travelled the full length of the Trans-Siberian Railroad.  In 1990, he spent a month in Indonesia examining the education system there.  A highlight was climbing to the top of Krakatoa.

Kees has led seven student tours of Europe and one adult tour to Europe and Morocco.  In 2016, Kees and Mayumi went on a cataract surgery mission to Dembi Dolo, Ethiopia.

During a Rotary Polio Immunization and District 5080 Friendship Exchange tour to Pakistan in 2015, events occurred that led Kees to the idea of creating an international peace park on the India-Pakistan border.

The presentation by Kees is the story behind the “Indus Peace Park” initiative.